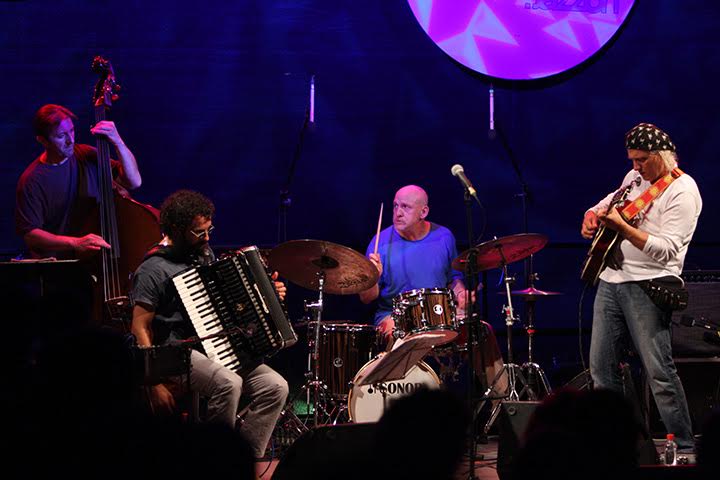 This group has a unique musical vision that absorbs and reflects all manner of music while retaining an enviable individualism and high quality craftsmanship that can span from quiet intimacy to searing intensity. Diverse musical backgrounds, which include jazz, modern classical, world music, and free improvisation. They have been working on original compositions as well as crafting beautiful and haunting improvisations. Their music blurs the boundaries between notated music and free improvisation; the unique sonic landscapes that result are grounded in history, while pushing at the boundaries of modern improvised music. 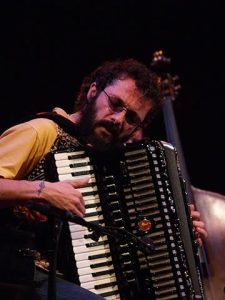 Simone Zanchini is an accordion virtuoso from Rimini, Italy.

Considered one of the most interesting and innovative accordion player on the international scene, his research moves between the boundaries of contemporary music, acoustic and electronic sound experimentation, mixing together experiences and super-refined influences issuing in an absolutely personal approach to improvisation materials. Eclectic musician, performs an intense concert activity with groups of diverse musical backgrounds (improvisation, contemporary music, jazz, classical). Graduated with honors in classical accordion at the Conservatory G. Rossini in Pesaro, with the Master Sergio Scappini.

In 2006 he published Be-bop Buffet (Wide Sound) a duet with Frank Marocco, a model of the Bebop language expressed with the accordion. In 2009 Better Alone…! (Silta Records) a solo project where prove all tone colours of his instrument through the use of a particular midi accordion, live electronics and laptop, in the same year he published also Fuga per Art Jazz 5et (DodiciLune Records), the unique tribute work of Zanchini, a tribute to his great Master and one of the greatest exponents of the jazz accordion: Art Van Damme.

In 2010 he published a new Project with Ratko Zjaca (guitar), Martin Gjakonovski (bass) and Adam Nussbaum (drums): The Way We Talk (In + Out Records).

In May 2012 has been released the latest Zanchini project: MY ACCORDION’S CONCEPT (Silta Records) a project built up on radical improvisation with the acoustic accordion and live electronics, a brave attempt to subvert the common code of expression through the accordion.

In December 2012 he recorded a new album with the ZZ Quartet (Zjaca, Zanchini, Nussbaum, Gjakonovski). 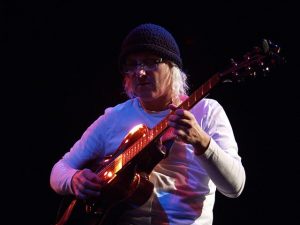 “Ratko presents a dynamic collection of jazz and attains something very rare indeed – a balance between body and soul.” – Vernon Reid

“Once again I am pleased to hear that Ratko is continuing to carve his niche, as an important contributor to contemporary music. Enjoyable and inspiring.” – Reggie Workman

“Ratko’s new CD is full of great compositions played by a top notch band. With his lyrical playing, this makes for a most enjoyable listening experience.” – John Abercrombie

“Ratko put together a great band and found beautiful original compositions for us to play on… it was a very free session, musically speaking everyone played their hearts out.” – Randy Brecker

“My brother Mike thrived on originality, everything about him was different. He would have loved this CD which oozes originality and interaction at the highest level. These great musicians know how to LISTEN… this is just a stupendous effort… I really enjoyed it too!” – Randy Brecker

“I listened and really enjoyed this album. The collaboration of these four artists is brilliant and extremely well played. They are all musicians of the highest caliber. CD – Life on earth” – Lenny White

Ratko Zjaca is an award winning guitarist, composer and recording artist with many critically acclaimed recordings under his name has recorded and performed with some of the most influential musicians in jazz and modern improvised music. He is an innovative musician, who is widely recognized as a technically advanced guitarist. He is known for being a relentless individualist, which is evidenced in his improvisational style. Ratko has had a prolific and extensive session history as a recording guitarist having played on many released recordings. He is a highly versatile player covering many areas of music but is best known for his work in the modern jazz and improvisation idiom. Ratko has released a number of albums as leader and sideman.

Ratko is considered a very gifted stylist, assumes many roles in his macrocosm of music: contemporary guitarist, composer, performer etc. Born in Croatia, Ratko in his early days was attracted by the sound of the guitar, both subversive sounds like those produced by Jimi Hendrix and from the classics like Bach and van Beethoven. He studied and graduated from Zagreb University. In his drive for the necessary knowledge and the enormous need for studies he sought his refuge in The Netherlands at the Rotterdam Conservatory, famous for its studies of modern music. There he could get teachings by well-known masters. He also followed masterclasses and personal courses with Joe Pass, Jim Hall, Pat Metheny, Mick Goodrick, Mike Stern, Bob Brookmayer, John Abercrombie and others.

Unlike some of his colleagues Ratko is not focusing only on saxophone phraseologies, but is continuously expanding the guitar’s vocabulary within today’s world of music. Whilst improving his performance to create his typical own sound and style, Ratko as a gifted teacher with a loaded teaching schedule, is capable of transposing most advanced phrases and concepts into structures, suitable for every musician. He gives master classes all around the world for guitar and fretless guitar, in countries like Slovenia, the Netherlands, France, Croatia and the United States. 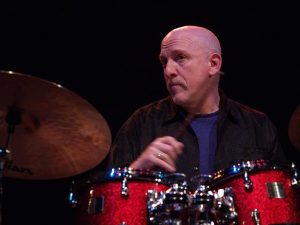 His exceptional experience of time and style, combined with astounding improvisational ingenuity, make him one of the world most highly regarded and in-demand drummers.

Adam grew up in Norwalk, Connecticut and started to play drums at age 12 after studying piano for 5 years, also playing bass and saxophone as a teenager. He moved to New York City in 1975 to attend The Davis Center for Performing Arts at City College. While there he began working with Albert Dailey, Monty Waters, Joe Lee Wilson, Sheila Jordan and he played with Sonny Rollins in 1977 in Milwaukee.

In 1978 he joined Dave Liebman’s quintet and did his first European tour with John Scofield. During the early eighties he continued working with John Scofield in a celebrated trio with Steve Swallow. In 1983 he became a member of Gil Evans Orchestra and he played with Stan Getz as well. He later joined Eliane Elias/Randy Brecker Quartet, Gary Burton, and Toots Thielemans. In 1987 he began touring with the Michael Brecker Quintet. In 1988 they recorded the Grammy winning “Don’t Try This At Home”. During 1992 he was part of the Carla Bley Big Band and that same year John Abercrombie hired him to complete his organ trio with Dan Wall. Since then he’s keeping active in a wide variety of groups. Among them a recently formed quartet ‘B A N N’ with Seamus Blake, Jay Anderson & Oz Noy, A co-op quartet ‘NUTTREE’ with Abercrombie, Jerry Bergonzi & Gary Versace, (a new CD with this group is coming out on the Kind of Blue label), ‘We Three’ with Dave Liebman & Steve Swallow, Eliane Elias Trio, The James Moody Quartet, and also busy maintaining an active freelance schedule.

Adam has taught as an Adjunct professor at New York University, the New School and State University of New York at Purchase. He’s also doing clinics and master classes around the world.

A very versatile drummer who generally plays in advanced settings, Adam Nussbaum is considered a major asset no matter where he appears and one of the finest jazz drummers today.

with Patricia Barber
Nightclub – Premonition
A Distortion of Love – Antilles

with Richie Beirach
Some Other Time – Triloka

with Paul Bley
If We May – Steeplechase

with George Cables
I Mean You – Steeplechase

with Joey Calderazzo
In The Door – Blue Note

with Tony Lakatos
The Music of Hoagy Carmichael – Skip Records

with Mark Murphy
Kerouac, Then and Now – Muse

with Judy Niemack
Straight Up – Freelance

with Niels Henning Ørsted Pedersen
To A Brother – Pladecompagniet/Sony

with Doug Raney
Blues On A Par – Steeplechase

with Ed Summerlin
Eye to the Future – Ictus

with Sigurd Ulveseth
I Wish I Knew – Taurus
Infant Eyes – Taurus
To Wisdom, The Prize – Taurus

with Dan Wall
Off The Wall – Enja

with Peter Weniger
Key of the Moment – Mons

with Torben Westergaard
What I Miss – Olufsen 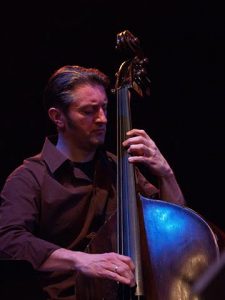 Born in Skopje, Macedonia in a family of jazz musicians. His father was the founder and conducter of the macedonian Jazz Radio Big Band and his mother a jazz vocalist. Martin started playing classical double-bass at the age of 14, but soon his passion for jazz awoke and resulted with the founding of his first band, Trio Spato.

The opening door to the international jazz scene was a jazz workshop with the Coltrane bassplayer Reggie Workman in Groznjan, Croatia (1990).

In 1991 he moved to Cologne, Germany studying jazz bass at the Music Academy of Cologne.

He also learned from other great bassplayers such as Arild Andersen, John Clayton, Mike Richmond and Eddie Gomez.

He has recorded more than 100 jazz and world music CDs.