Although these three musicians know each other from different projects, it wasn’t until the end of 2013 when this trio was born. The reason of this combination was Risco’s desire of putting together the singular sound of vibes and organ in a group that were as small as autonomous, emulating the tandem of Joey DeFrancesco & Bobby Hutcherson.

The result of that is a sound with the traditional touch of the trio, but with a cool sound, calling the attention of audiences in festivals and clubs in Spain and Portugal such as Imaxinasons, Percursos da Música (Ponte de Lima, Portugal) or Ciclo 1906 Jazz.

The repertoire, contained in their first CD “Ginger Lemon and Honey” (FreeCode, 2015), moves between originals and standards using the most intimate sonorities, mixed with groove and up tempos. 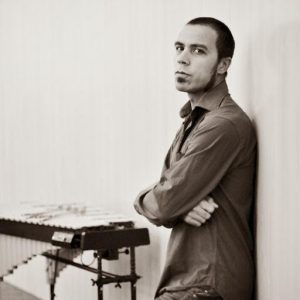 Although he’s been lately focussed in the vibraphone, Ton Risco has been always a drummer and percussionist.

Taking his first steps at the age of five under the guidance of his brother Fernando Risco, later he will study in different conservatoria in Galicia and with teachers like Marcos Vázquez, Federico Elías, Angel Celada or Pedro López.

In 1999 he moves to Holland to study at the Royal Conservatory in The Hague, where he obtains bachellors in both, classical percussion and jazz vibraphone, with highest marks and special mention, in 2004 and 2006, respectively. There he studies with the vibraphonist Frits Landesbergen, the percussionist Ali N’Diaye Rose, from Senegal, and with percussion teachers from the comtemporary music area like Wim Vos, working directly with composers like Steve Reich, György Kurtág or Reinbert de Leeuw.

In 2013 takes lesson from the vibist Joe Locke in New York, as well as from Dave Samuels and Tony Miceli at the Delaware University (New Jersey), or David Friedman in Berlin.

During the last years, he focusses his activity in improvised music as a vibist and drummer in different projects as a freelance, combinning all this with teaching at the Conservatory in Santiago de Compostela. 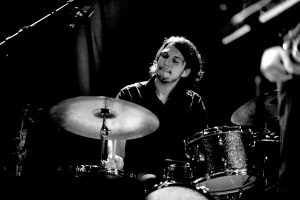 Iago Fernández was born in Cangas in 1987. He started his musical studies on percussion at the conservatory of his town with teacher Luís Carballo. His first contact with jazz was in the “Seminario Permanente de Jazz de Pontevedra (SPJP)” tought by Abe Rábade and Paco Charlín, studying four years including master classes and concerts with international artists. 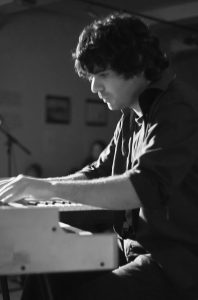 Alex Salgueiro (A Estrada, Galiza), begins with the flute at the age of 8 self-taught, as a member of the “Banda Cultural de Teo” and for 14 years of the “Banda Municipal de A Estrada” as principal flute. He ends his bachelor of music in A Coruña with honors in the specialty of flute.  He also attends to master classes with teachers like Will Offermanns, Jos Wuytack, Jorge Caryevschi among others.

As an active sideman, he plays with numerous groups, either in the classical field (Aula de Cámara, ExperimentaDanza, “Macuf”, etc.) and the popular field (Matina Folk, A Matraca Perversa, Galegoz, etc).

After graduating in flute he begins modern piano studies at the “Escola Estudio” and the “Seminario Permanente de Jazz de Pontevedra” with the teacher Paco Charlín. Soon he began collaborating with great musicians in the jazz scene in Spain.

As keyboardist collaborates with the pop group “Immaculate Fools” and the formation of experimental music “Chanzo”. The Hammond organ is the instrument that has focused the study and activity collaborating with formations such as “Ton Risco trío”, “Juzz”, “Felipe Villar organ trío”, etc.

Currently, besides being an eclectic musician and a busy sideman, he is a flute teacher at the conservatory and conducting soundtrack in the audiovisual field.